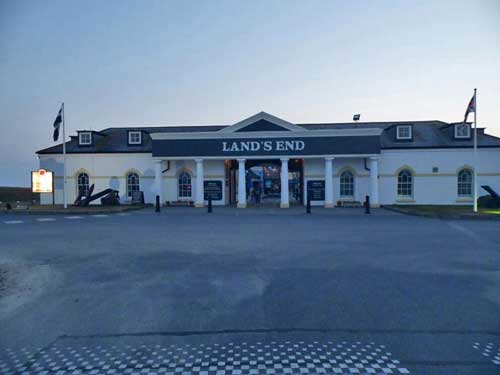 Land's End is one of the most popular outdoor attractions in Cornwall. Situated on the westerly point of mainland Britain, it is surrounded by spectacular views of the Atlantic Ocean. 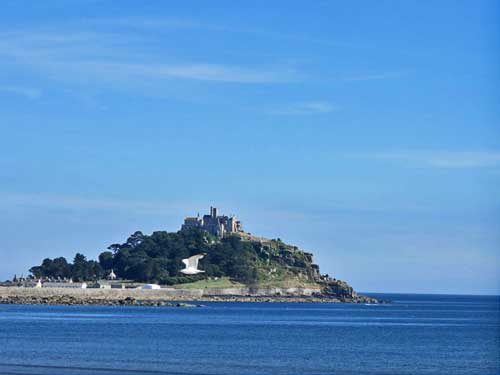 Explore the amazing island world of St Michael’s Mount and discover legend, myth and over a thousand years of incredible history…Follow in the footsteps of pilgrims and walk the causeway at low water or enjoy a short motor boat trip when the tide is in – getting to St Michael’s Mount is always an adventure. Climb the ancient, cobbled path to the inspiring medieval castle, gaze down at the beautiful gardens and enjoy magnificent views across the bay to Penzance. 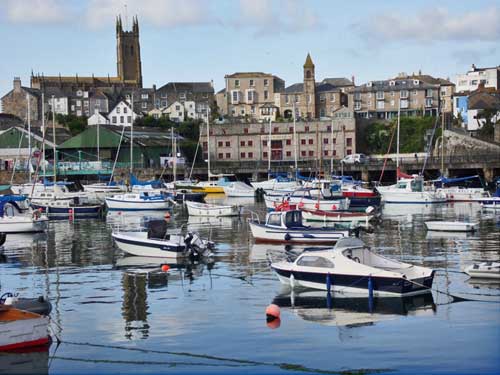 Penzance is situated in the shelter of Mount's Bay, the town faces south-east onto the English Channel, is bordered to the west by the fishing port of Newlyn and to the east by the civil parish of Ludgvan. The town's location gives it a temperate climate that makes it warmer than most of the rest of Britain. 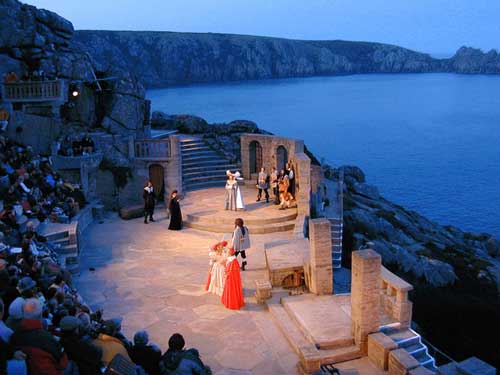 The Minack Theatre is an open-air theatre, constructed above a gully with a rocky granite outcrop jutting into the sea (minack in Cornish means a stony or rocky place). The theatre is located near Porthcurno, 4 miles from Land's End. The theatre was the brainchild of Miss Rowena Cade, who lived at Minack House overlooking Porthcurno Bay. 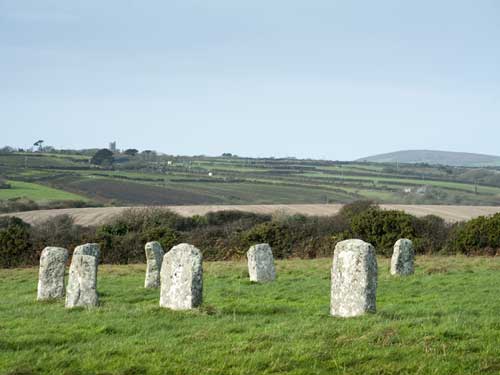 Merry Maidens stone circle is thought to be complete, it comprises nineteen granite megaliths and is situated in a field alongside the B3315 between Newlyn and Land's End. The circle is approximately twenty-four metres in diameter, with the tallest stone standing 1.4 metres tall. Stones are regularly spaced around the circle, with a gap or entrance at its exact most easterly point. 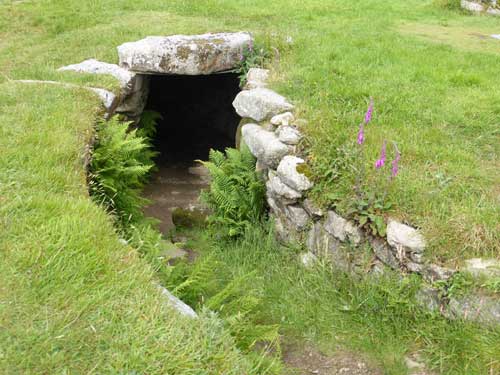 Carn Euny is an archaeological site near Sancreed, on the Penwith Peninsula with considerable evidence of both Iron Age and post-Iron Age settlement. Excavations on this site have shown that there was activity at Carn Euny as early as the Neolithic period. There is evidence that shows that the first timber huts in this site were built around 200 BC, but by the first century before Christ, these timber huts had been replaced by stone huts. The remains of these stone huts are still visible today. 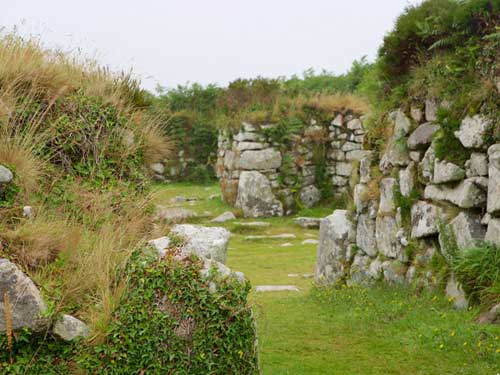 Chysauster Ancient Village is Romano-British village of courtyard houses which is in the care of English Heritage. To the south east is the remains of a fogou, an underground structure of uncertain function. The village was believed to have been constructed and occupied between 100 BC and 400 AD; it was primarily agricultural and unfortified and probably occupied by members of the Dumnonii tribe. 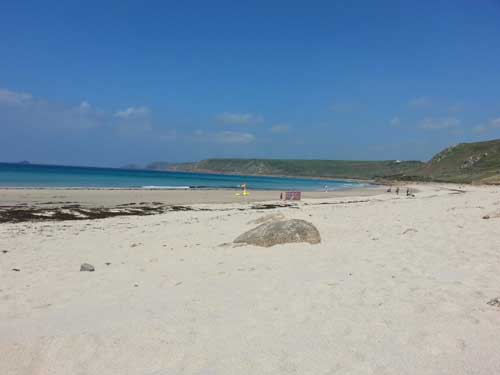 Sennen Cove, the bay where the dolphins play... The coastal paths can be enjoyed by both walkers and wildlife enthusiasts whilst those wanting to take things a little easier can stroll along Sennen's beautiful sandy beach and afterwards pay a visit to the Old Success which is a delightful 17th century Fisherman's Inn, which has been sympathetically modernised to improve the appearance and facilities, but still retains its character and charm. 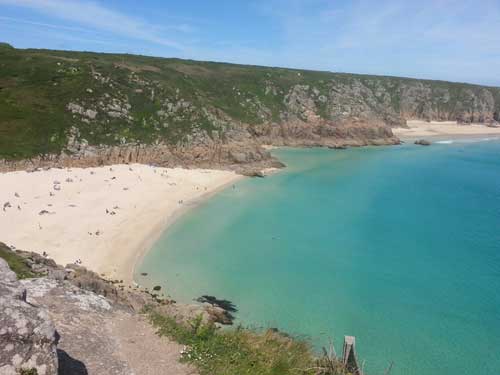 The cliffs and coastline around Porthcurno are officially designated areas of outstanding natural beauty and widely considered as some of the most visually stunning in the South West. These can be enjoyed by walkers using the many public footpaths in the area. The South West coastal footpath passes through the area often within just a few yards of the clifftops. Extensive coastal areas are now owned and maintained by the National Trust and the remainder by the local parish council. 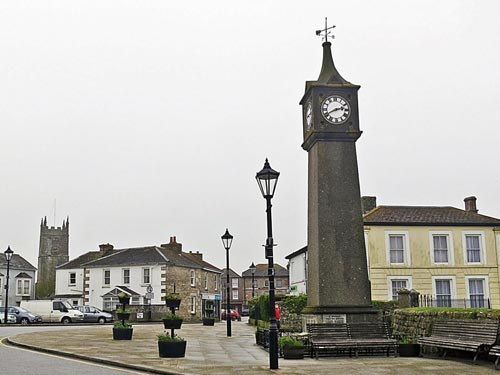 The town of St Just is situated approximately eight miles (12.7 km) west of Penzance along the A3071. St Just is one of the most ancient mining districts in Cornwall and remains of ancient pre-industrial and more modern mining activity have had considerable impact on nearby landscape. Some sources state that the name St Just derives its name from Justus or Saint Just, who was sent to England by Pope Gregory in A.D. 596, with Saint Augustine to convert the Saxons. 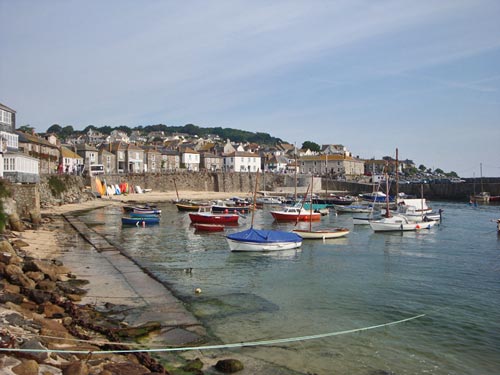 Mousehole is a village and fishing port near Newlyn reputed to have one of the most beautiful harbours in the country. Mousehole is currently within the parish boundaries of the town of Penzance. Offshore from Mousehole is an islet called St Clement's Isle. 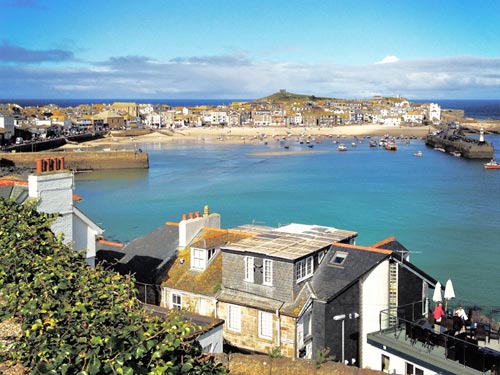 St Ives is a seaside town famous for it's artists and galleries. The town lies north of Penzance, and west of Camborne. In former times it was commercially dependent on fishing as an industry. The decline in fishing, however, has caused a shift in commercial emphasis and the town is now primarily a holiday resort.